Yes! We found the candidate who will replace LaMalfa. Our Revolution Chico is proud to endorse Audrey Denney for CA Congressional District 1!

Audrey is truly a people’s candidate. She aligns with the issues Bernie Sanders championed in 2016 and goes a step further with her vibrant vision for the North State. As an educator, farmer, and human rights activist grounded in her faith, she is the ultimate antidote to LaMalfa.

We intend to mobilize together with Our Revolution national to help bring her agenda to defend our human rights, fight climate change, revitalize our economy, and protect our water as a public trust resource.

We are all in for Audrey, and we hope that you’ll join us! Learn more and maybe signup to volunteer with her campaign! 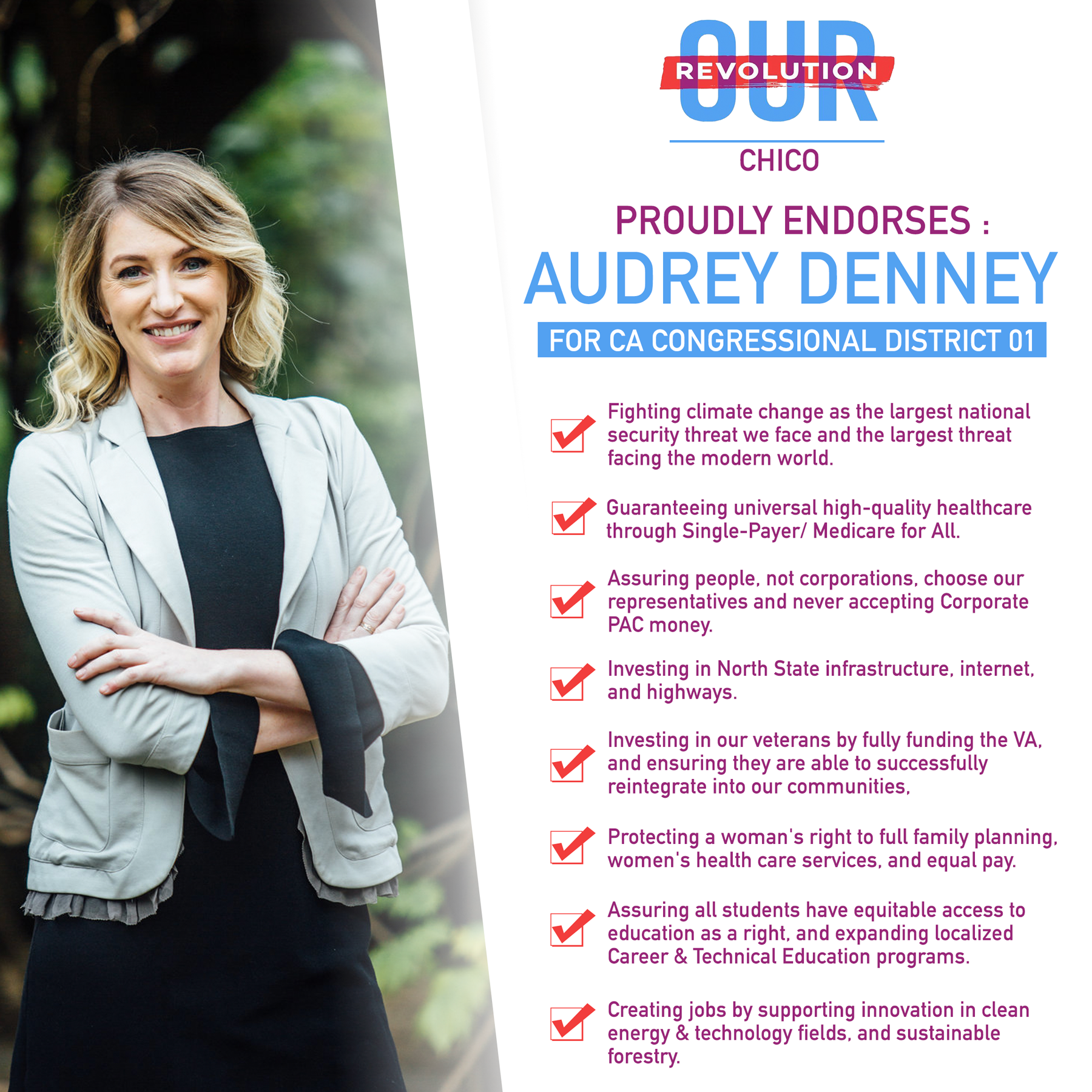 ABOUT OUR ENDORSEMENT PROCESS:

Our Revolution Chico set out to find a candidate that could repeal and replace LaMalfa in 2018. We didn’t intend to endorse in the primary but felt an imperative to do so because it is such a contested race. We spent 2017 hosting candidate research parties, issue-based town hall events, protests, & postcard writing campaigns while bringing people together from all walks of life  — both urban and rural — to think about the type of candidate that could win in this District.

Our Revolution has never been interested in “flipping the district from Red to Blue.” That is incredibly short-sighted. We aim to transform how people engage in the democratic process while taking our district back from the moneyed interests that have bought it. Kicking money out of politics is something we can achieve with a candidate who is not beholden to big money interests. For Our Revolution Chico and national, the candidate must pledge to run a grassroots campaign. For us, this means not taking money from big oil or corporate PACs. A true People's Candidate.

Audrey won both our in-person and online straw polls, and even though she joined nearly eight months after the initial candidate -- she’s smoked them! The Chico State Democrats even rescinded their previous endorsement, to endorse Audrey Denney. She has also received the California Young Democrats endorsement, the only official party endorsement in the California District 1 primary election. The momentum is behind her as she fundraises from voters within the district -- not Silicon Valley or other corporate power brokers.

It was a no-brainer for Our Revolution Chico. Audrey Denney is by far the most qualified candidate with the most energy and excitement. Not just anyone can beat LaMalfa - but Audrey Denney can.

Join us to reinvigorate the North State.